Makkah and Mina: The View From Above 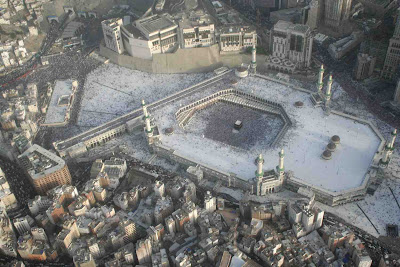 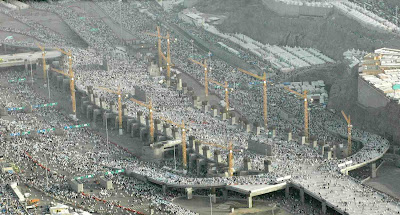 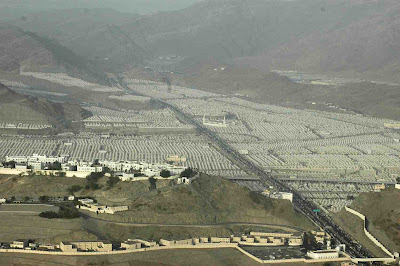 Note: This article has just appeared in the prestigious Haj & Umra Magazine (April 2007 edition) brought out by the Ministry of Haj. The glossy and well-edited magazine is not available online but is mailed every month to a select group of subscribers worldwide. All pictures posted above are mine and my copyright. — Siraj Wahab, March 27, 2007

MAKKAH, January 1, 2007 — Covering the Haj is no easy task. Ask any print or broadcast journalist and he or she will tell you about it being the most challenging assignment. I covered Haj for the Jeddah-based English daily Arab News on nearly six occasions. I have been on foot, bus, truck and bike, but Haj 1427 was extraordinary in that I had my first look at the holy city of Makkah and the tent city of Mina from overhead. Thanks to a friendly lift from a Civil Defense helicopter, all the improvements at the holy sites were laid out before my eyes in panoramic detail.

Down in Mina, the streets were packed with pilgrims rushing to and fro. Everywhere one looked, it was a colorful sea of people. Mina is a small city and as far as your eye can see, tents cover every open space. They have been neatly arranged, row after row. The entrances to many of the tents are decorated with banners and garlands. This helps pilgrims identify their temporary residences from among so many that otherwise look the same. Huge balloons hang in the sky over certain locations to help pilgrims find their tents.

From the pictures appearing in newspapers, magazines and on television everyone gets the impression that the Haj is a sea of white, but being on the ground with the pilgrims it is amazing how colorful it is. Each national group is carrying a flag. Many of the pilgrims have signs or some sort of design pinned to their clothing to help them identify each other. They have prayer rugs over their arms and bags clutched in their hands. Even the pilgrims’ faces are colorful. Every shade of human skin is represented. Among the two million pilgrims are the tall, majestic Afghans with flowing beards, bushy eyebrows and aquiline noses; the lanky Somalis with their graceful gait; the helpful Sudanese, with smiles playing on their faces at all times; the loquacious Egyptians with goatees; the fair-skinned Iranians always walking in one large group; the young Pakistanis with their trademark mustaches and the ubiquitous Indians talking away in their regional languages.

The sheer numbers of pilgrims in Mina overwhelm everything in their path. They engulf the motorized vehicles and march up and around the Jamrat Bridge. They are an oncoming force on all routes to Makkah. Traffic police and security personnel must shout at top volume to be heard over the hubbub of the crowds. For the officers, directing the human traffic in the area is a physically demanding task. “Please don’t push,” the officers beg. “Please keep moving,” they implore. “Please be careful,” the officers urge. The pilgrims, caught up in their own immediate surroundings, too often don’t understand why the officers are so unwilling to let them sit down on the pavement or why the police refuse to allow them to turn against the flow on certain streets.

It is a pity that every pilgrim coming to Haj could not be given a bird’s-eye view of the area. So they don’t have a sense of the staggering security and logistics nightmare that the authorities are trying to keep under control. The helicopters circling the holy sites from above are constantly reporting to the ground commanders about areas of congestion at the holy sites.

Security forces manning the massive bridge are immediately alerted to the problems and move in to remedy the situation, perhaps by restricting the flow of pilgrims or vehicles to the area, or clearing out squatters and their luggage or directing sidewalk vendors to less obstructed locations.

In the past, sometimes I would get very nervous with the security personnel at Haj. Their instructions could seem pointless and inconvenient. Then, I had the opportunity to join 19 other journalists in a Civil Defense helicopter tour of the holy sites. Packed into the passenger benches of two massive choppers, we clamped earmuffs to our heads to drown out the rotor and engine noise and hung on to overhead straps for dear life.

It took just a few minutes for us to realize that the experienced Saudi pilots were taking us on a slow gentle ride, designed to allow us to view the area, snap our photos and keep our wits about us. One door of the helicopter was open from the top, enabling everyone to take turns putting camera lenses out for a clear unobstructed capture of the scene below.

From above, the pilgrimage looks very different. The hubbub is gone and the scene below is white, black and shades of gray. At Mina, the tents stretch out in waves with Al-Kuwaiti Mosque floating in the center of the swells. King Abdul Aziz Bridge is a slash through tent city.

The Jamrat area has undergone the greatest transformation. So much has been written about the new Jamrat Bridge that I didn’t expect to be surprised by the sight of it. But surprised I was. The new bridge is huge and already two levels -- ground and first level -- have been completed. There is an air-conditioned basement as well. The basement is actually a highway that allows the transport of aged and infirm pilgrims directly to Mina and can also be used for the movement of ambulances and emergency vehicles.

Television stations broadcasting from the area showed cranes and heavy equipment in the Jamrat Bridge area, so many people thought the bridge was not ready for the pilgrims. That was not true. After Haj this year, more levels will be added to the bridge and other improvements made, but the bridge in its current condition greatly facilitated this year’s pilgrimage.

We flew over the hills that surround Mina, with the highway to Makkah a black snake, pushing through the tunnels in the mountains beneath the helicopter. The road was remarkably unobstructed and traffic was moving well toward Makkah. Our group included journalists from all over the world, both men and women, including Ms. Arifa Akbar, a news reporter with UK’s The Independent newspaper, Saudi photographers Ms. Susan Baaghil and Mr. Ahmad Al-Ammar and TV producer Mr. Azlan Bin Asri from Singapore’s Channel News Asia.

Suddenly there was a collective gasp. The Holy Haram came into view dead ahead. Cameras began snapping and telephoto lenses were set long to get the closest shot.

“I can’t believe this. This is just superb and fantastic,” gushed Ms. Susan Baaghil excitedly. “It is like performing tawaf (circumambulation) from the sky,” she said. “I have taken pictures of many subjects in the past but the pictures in here are among my most prized possessions,” she said tapping at her high-tech camera.

Mr. Ahmad Al-Ammar was equally delighted. “Before boarding the helicopter I had no idea what I was going to see. But what I saw from up above was fascinating. All our lives we have been praying in the direction of Kaaba and here was Kaaba in all its glory shimmering in the glow of a setting sun. It was just amazing. I kept clicking as the helicopter circled the holy city,” he said.

Once the requisite images were in hand, everyone needed a photo of himself or herself with the pilgrims performing tawaf in the background. As the earmuffs cut out all sound, communication was by means of hand signals, with all the journalists shifting left and right to enable everyone to have an equal chance to take photographs and get a direct look at the majestic scene below.

The helicopter tour has given me a new appreciation for the efforts of the authorities. Hearing that nearly three million pilgrims came for Haj is one thing. Casting eyes on those millions from above provides a different perspective on the event and what is required to bring it to a successful conclusion.
at March 27, 2007
Email ThisBlogThis!Share to TwitterShare to FacebookShare to Pinterest

Being a non-muslim, my knowledge of the Haj comes only through media reports.

Thanks for writing such a personalised and beautiful account of the pilgrimage and the photographs are, of course, worth more than a thousand words!

A magnificent peice of writing that makes us imagine as if we are also in the same helicopter enjoying the spritual journey.

Thank you, Sidhu Saaheb, for all the good words. I appreciate.

Dear Tauseef: That was a magnificent comment. Thank you.

This is a wonderful article. Incidentally I performed Haj this year and I can picture through Siraj Wahab's eyes how it felt fom up there. God bless you. Now I know why they say a picture is worth a thousand words. I am truly convinced.

These pictures are breath-taking. Subhanallah. Congratulations.

Thank you for letting us share with you a breath taking view of glorious Kabba...,a bird's eye view.
Besides,your passionate running commentry is fascinating.It is a goose bump giving naration,arising from one heart and reaching many hearts.When one raises oneself to high heights one can see many things with inward-eye,including a mass of humanity in rotating motion of "Tawaf" like each and every spec in this vast universe does,regardless of of cast creed and colour & devoid of meaningless indivisul labels. Majid Kazi

Refreshing. It made my day. Jazakallah.

Thank God I chanced upon your article. The Saudi authorities took you up and you lifted our souls up along with you. I was with you almost flying with other journalists with their gear, and the grand Hajj below.

A journalist of your merit is badly needed to cover our woes too to the west. May your tribe incrase and flourish.

Thank you very much for all the good words. God bless you.