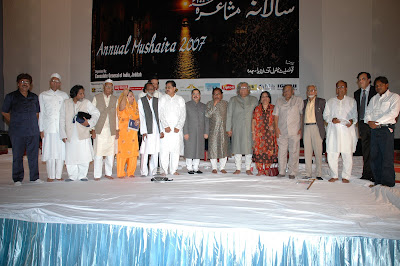 
Couplets Under the Stars at Jeddah's Annual Mushaira

JEDDAH, June 16, 2007 — The general perception is that Urdu poetry is all about love — and perhaps rightly so. Ghazal, the most popular genre of Urdu poetry, is essentially a conversation between two lovers. But on Thursday night (June 15, 2007), a young poet from Malegaon in Maharashtra gave ghazal a new meaning by drawing upon a popular verse from the Holy Qur’an:

This verse from Surah Al-Imran, which is extensively quoted by Muslims at all times, simply means Allah honors those He is pleased with and disgraces those He is not happy with. Altaf Zia used this verse to compose a very interesting ghazal that became a big hit with the capacity crowd at the annual mushaira organized by the Consulate General of India at Jeddah’s sprawling and huge International Indian School.

The crowd was packed inside the school’s majestic auditorium, while outside the lucky latecomers sat in an overflow space, a playground where the cool sea breeze mixed with poetic verse, causing the fronds of the nearby date palms to shimmer and making for a pleasant evening under the stars.

There was a huge applause. Then Altaf Zia condemned the recent attack on Zahid Ali Khan, the editor-in-chief of the India’s most prominent Urdu daily Siasat. The attackers had stopped Zahid Ali Khan’s car near Hyderabad's Mehdipatnam area in March this year and had thrown filth at him. “My answer to his attackers is simple,” said Altaf Zia, and recited the couplet that became the highlight of the night:

Two other reasons for Altaf Zia’s popularity was his melodious voice and an interesting way of presenting his compositions.

Altaf Zia was not the only successful poet at the very well-organized and well-attended mushaira, the credit for which goes entirely to the young, dynamic and popular Indian Consul General Dr. Ausaf Sayeed.

Among the other poets who were equally successful included Muzaffar Razmi, from Kairana in Uttar Pradesh’s Muzzafarnagar district. He struck an instant chord with the audience with his famous couplet that is on the lips of every Urdu lover in the Indian Subcontinent.

I.K. Gujral read this couplet when he took his oath as the prime minister in 1997.

Muzaffar Razmi’s diction and compositions were beyond compare. Ghazal is known for its lyrical qualities and, in Muzaffar Razmi, it is at its peak and pinnacle. His diction was fresh, his phraseology unique, his coinage of metaphors superb, his imagery picturesque. His fans hung onto his every word of every couplet. His thought content was a perfect match to the lyrical attribute of the ghazal.

Then there was Rahi Bastawi from Basti in Uttar Pradesh, famous for his “geet,” another popular form of Urdu poetry that is hugely popular in the north of India. He was highly successful and his “Are re re na baba” was being crooned by the audience much after the five-hour poetry-reading session was over.

Dr. Qasim Imam from Bombay surprised the audience with his excellent anchoring and beautiful poetry. Two particular couplets from him sent the audience in a crescendo of wah-wahs. Both had political overtones, but their instant popularity was indicative of the truthfulness of the message behind them.
One was:

And the second one was:

Dr. Shahnaz Nabi, from Kolkata, wowed the audience with excellent and meaningful poems in a refreshing idiom. She received quite an applause. Associated with Urdu Academy, Kolkata, she has been in the forefront of giving Urdu poetry a new dimension by talking about the problems of the day. Her play with words was excellent.

Ali Zaheer from Hyderabad was inimitable. He rendered some of the choicest couplets that are in the Urdu poetry. His play of words was masterly and his couplets had that scholarly air. This one, for instance:

Dr. Naseem Nikhat was excellent and it was she who made the crowd remain glued to their seats till the very end. She recited beautiful couplets and her melodious voice kept everybody spellbound. Dr. Naseem Nikhat was a treat to hear; her treatment of ghazal is off-the-beaten track. She finds for herself new “radeefs” and “qafiyas”. Ghazal, which had become notorious for its monotonous and overworked and overwrought rhymes, and “radeefs” is treated by Dr. Naseem with a new and fresh idiom and images. She stole the event with highly romantic couplets.

Then there was Dr. Shafi Sagar. His satire was reflected in his delicate compositions. He made the audience laugh out loud. Rabab Rashidi from Shahjahanpur too recited some memorable couplets. Mashaf Iqbal Tauseefi from Hyderabad was the pick among the elder poets. His “Dekhen Kya Kar Rahi Hain Tanhai, Aaj Apne Hi Ghar Pe Dastak Den” was superb and very well appreciated.

The president of the mushaira was the erudite poet from Delhi, Rifat Sarosh. He is one of the greatest exponents of Urdu poetry in all its forms and gifted with a rare mode of thought and feeling about love and rebellion. He has given a new meaning to the craft of Urdu poetry.

Going by the large number of people who turned up for the mushaira, it was a record in the history of mushaira in the Middle East. The Jeddah Indian school’s grand auditorium was packed with poetry lovers and an equally large number were seated in the school grounds where the mushaira was beamed live on a huge screen.

The poets at the event came from across the length and breadth of the country. Consul General Dr. Ausaf Sayeed, in his inaugural address, said: “Care was taken to represent almost every region in India. In line with the philosophy of not repeating the poets year after year, new faces were invited. And while they were new to Jeddah, they are well-known in India and have authored very many books.”

He continued, “We have been innovating with the presentation of mushaira, which is a risky thing. But since we are not organizing it for commercial purpose, we can afford to do it. And people have loved it.” Dr. Ausaf Sayeed said: “It goes to indicate that if there is a will to promote Urdu in a good way, people appreciate it. We need to promote good poets. Mushaira is about poetry, not singing and nautanki,” he said.

According to the consul general, the idea was to introduce “academic poets” to the people here in Jeddah. Poets who are being read through their books and through magazines but who have not been “performing artists,” so to say.

Everybody appreciated Dr. Ausaf Sayeed’s efforts in promoting Urdu language. “It is in his blood,” said Dr. Qasim Imam, referring to Dr. Ausaf Sayeed’s famous father and well-known Urdu essayist, the late Awaz Sayeed. “Dr. Ausaf Sayeed has given a new turn to the composition of mushaira,” said the elderly Rifat Sarosh.

Earlier, Dr. Suhel Ejaz Khan, Haj consul and director of India Forum, welcomed the poets. The mushaira went on for five marathon hours, with the crowd remaining glued to their seats till the very end, screaming “Mukarrar, mukarrar.” Encore, encore
at June 16, 2007
Email ThisBlogThis!Share to TwitterShare to FacebookShare to Pinterest

I heard the following lines at a neighbourhood dargah during the annual Urs and appreciated the underlying message very much, though these may not exactly epitomise poetic brilliance:

Mr Altaf Zia should not speak much about Hyderabad Politics as he does not know the Scenairo in Hyderabad Mr Zahid Ali Khan is trying to damage the Only Muslim Party in Hyderabad which is MiM BY Writing Provactative things in his Newspaper first he should advise him and tell hm not to Spread Fitna in the Community.

Yes, Altaf Zia should not politicise mushairas. He is a fool. His couplet sounds good but the context is idiotic. He has fallen into the trap of anti-MIM elements.

Before trashing Altaf Zia (who is he, by the way? Never heard of him before) we should not forget the negative role played by the Majlis in Hyderabadi politics. All the so-called great institutions created by the so-called Salar are meant for only the super-rich, not for ordinary hard-working Hyderabadis. Just because MIM is a Muslim party doesn't mean we should condone their high-handedness. Let me add one more point here: I like Barrister Assaduddin Awaisi. He is doing a great job as a parliamentarian. His heart really beats for the community. I have heard him on TV many times, he is really good and an asset for the community.

Wandered here through one of your comments on another site I frequent.

Enjoyed your brief on the mushaira...esp the couplets you chose to mention...nice job.

You know nothing about Indian poets. Otherwise you would not have praised this Zia guy to the skies. He is a nobody. Seriously.