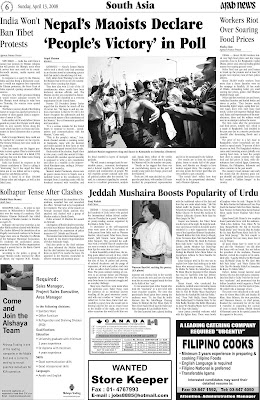 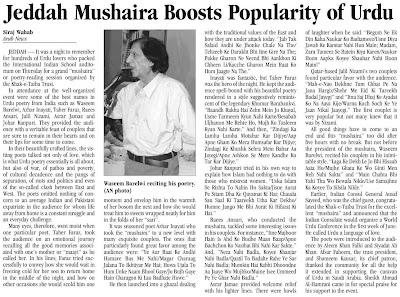 It was a night to remember for hundreds of Urdu lovers who packed the International Indian School auditorium in Jeddah on Thursday for a grand "mushaira" or poetry-reading session organized by the Khak-e-Taiba Trust.

In attendance at the well-organized event were some of the best names in Urdu poetry from India such as Waseem Barelwi, Azhar Inayati, Taher Faraz, Raees Ansari, Jalil Nizami, Asrar Jamae and Johar Kanpuri. They provided the audience with a veritable feast of couplets that are sure to remain in their hearts and on their lips for some time to come.

In their beautifully crafted lines, the visiting poets talked not only of love, which is what Urdu poetry essentially is all about, but also of war, of pathos and poverty, of cultural decadence and the pangs of separation, of riots and politics and even of the so-called clash between East and West. The poets omitted nothing of concern to an average Indian and Pakistani expatriate in the audience for whom life away from home is a constant struggle and an everyday challenge.

Many eyes, therefore, went moist when one particular poet, Taher Faraz, took the audience on an emotional journey recalling all the good memories associated with one's mother or "maayi" as he called her. In his lines, Faraz tried successfully to convey how she would wait in freezing cold for her son to return home in the middle of the night, and how on other occasions she would scold him one moment and envelop him in the warmth of her bosom the next and how she would treat him to sweets wrapped neatly for him in the folds of her "sari".

It was seasoned poet Azhar Inayati who took the "mushaira" to a new level with many exquisite couplets. The ones that particularly found great favor among the audience were:

Inayati then launched into a ghazal dealing with the traditional values of the East and how they are under attack today:

Inayati was fantastic, but Taher Faraz was the hero of the night. He kept the audience spellbound with his beautiful poetry rendered in a style suggestively reminiscent of the legendary exponent of classical ghazal, Khumar Barabankvi.

Raees Ansari, who conducted the mushaira, tackled some interesting issues in his couplets. For instance:

Johar Kanpuri tried in his own way to explain how Islam had nothing to do with those who mistreat women.

Asrar Jamae provided welcome relief with his lighter lines. There were howls of laughter when he said:

The first couplet is very popular but not many knew that it was by Jalil Nizami.

All good things have to come to an end and this "mushaira" too did after five hours with no break. But not before the president of the mushaira, Waseem Barelwi, recited choicest couplets in his inimitable style:

Earlier, Indian Consul General Ausaf Sayeed, who was the chief guest, congratulated the Khak-e-Taiba Trust for the excellent "mushaira" and announced that the Indian Consulate would organize a World Urdu Conference in the first week of June. He called Urdu a language of love.

The poets were introduced to the audience by Aleem Khan Falki. Afsar Faheem, the trust president, and Shameem Kausar, its chief patron, thanked the community for all the help it extended in supporting the caravan of Urdu in Saudi Arabia. Sheikh Ahmad Al-Hamrani came in for special praise for his support to the event.

at March 28, 2010
Email ThisBlogThis!Share to TwitterShare to FacebookShare to Pinterest

listening to you...i also want to add one...which i heard in a mushaira...