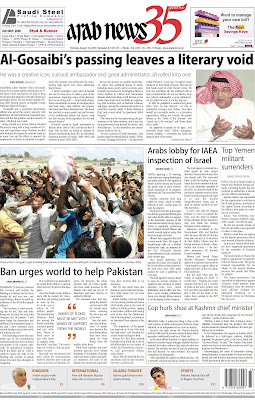 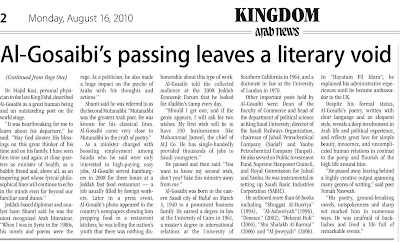 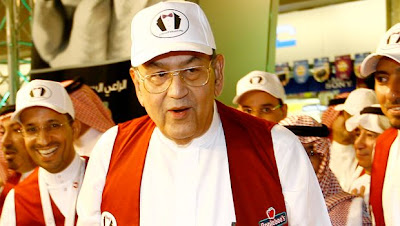 "Al-Gosaibi was a prominent government official who served the country sincerely with dedication. He had held several important positions and the last position was the minister of labor," the Royal Court said.

Acting Riyadh Gov. Prince Sattam attended the prayers along with a large number of citizens and expatriates, many of whom recalled with fondness the impact the minister made on so many lives and his efforts to promote the employment of Saudis in all levels of employment. The minister was well-known for maintaining high spirits even when addressing heady issues.

"I barely remember a time when Al-Gosaibi was not in some form or other a part of the government, impacting many of the decisions that we are living with - from health clinics, water consumption to issues of unemployment and work visas," said celebrity and popular talk-show host Muna AbuSulayman. "His death has touched so many people, not just because of his multifaceted talents and literary work but also because of his legendary dry wit and sense of humor."

He was also known as a prolific Saudi literary talent who published dozens of books, including essays, poetry, and love stories, some of which were banned in the Kingdom. Before a recent decision by Culture and Information Minister Abdul Aziz Khoja to lift the ban on his works, these books were available in neighboring Arab countries such as Bahrain, Lebanon and Egypt. Among his controversial works is a collection of poetry called "A Battle Without a Flag" and a novel called "An Apartment Called Freedom."

"The irony was he was representing the government as the labor minister, and it was this same government that banned his works," said AbuSulayman. "It only symbolizes the contradictory world we live in."

"He was a pioneer of Saudi literature," said Qassim-based novelist Khaled Al-Awadh. "When he wrote "Shuggat Al-Hurriya" ("An Apartment Called Freedom") years ago, it inspired many Saudis to try their hand at novels. That was the first Saudi novel in strict literary terms. His style was matchless. He was endowed with so many characteristics. He was our literary icon, our cultural ambassador, a great administrator, all rolled into one. It is a big, big loss."

In 2002 he published a controversial poem titled "You are the Martyrs," an ode to Palestinian teenager Ayat Akhras, who blew herself up two weeks earlier in a Jerusalem supermarket, killing two Israelis. He praised Akhras as the "bride of the heavens" who "stands up to the criminal" and "kisses death with a smile."

"He appealed to people of all ages," said journalist Wajdi Sindi. "Elders, youngsters, women, children — everybody was under the magical spell of his words."

Dr. Majid Kazi, personal physician to the late King Fahd, described Al-Gosaibi as a great human being and an outstanding poet on the world stage.

"It was heartbreaking for me to learn about his departure," he said. "May God shower His blessings on this great thinker of his time and on his family. I have seen him time and again at close quarters as minister of health, as a bubbly friend and, above all, as an inspiring poet whose lyrical philosophical lines will continue to echo in the minds even far beyond our familiar sand dunes."

Dr. Kazi recalled how his late brother Qazi Saleem, the famous Urdu poet from India, was enchanted by Al-Gosaibi and his poetry. “My brother could not help but translate some of Al-Gosaibi’s poems in English and Urdu poetry, and the collection, entitled ‘Lyrics From Saudi Arabia’, was published by an American publishing house in late 1980s.”

Jeddah-based diplomat and analyst Isam Shanti said he was the most recognized Arab litterateur. "When I was in Syria in the 1980s, his novels and poems were the rage. As a politician, he also made a huge impact on the psyche of Arabs with his thoughts and actions."

Shanti said he was referred to as the Second Mutanabbi. "Mutanabbi was the greatest Arab poet. He was known for his classical lines. Al-Gosaibi came very close to Mutanabbi in the craft of poetry."

As a minister charged with boosting employment among Saudis who he said were only interested in high-paying, easy jobs, Al-Gosaibi served hamburgers in 2008 for three hours at a Jeddah fast food restaurant - a job usually filled by foreign workers. Later in a press event, Al-Gosaibi's photo appeared in the country's newspapers showing him prepping food in a restaurant kitchen; he was telling the nation's youth that there was nothing dishonorable about this type of work.

Al-Gosaibi told the collected audience at the 2008 Jeddah Economic Forum that he looked for Aladdin's Lamp every day. "Should I get one, and if the genie appears, I will ask for two wishes. My first wish will be to have 100 businessmen like Muhammad Jameel, the chief of ALJ Co. He has single-handedly provided thousands of jobs to Saudi youngsters." He paused and then said: "You want to know my second wish, don't you? Take this ministry away from me."

Other important posts held by Al-Gosaibi were: Dean of the Faculty of Commerce and head of the department of political science at King Saud University; director of the Saudi Railways Organization, chairman of Jubail Petrochemical Company (Sadaf) and Yanbu Petrochemical Company (Yanpet). He also served on Public Investment Fund, Supreme Manpower Council, and Royal Commission for Jubail and Yanbu. He was instrumental in setting up Saudi Basic Industries Corporation (SABIC).

Despite his formal status, Al-Gosaibi's poetry, written with clear language and an eloquent style, reveals a deep involvement in Arab life and political experience, and reflects great love for simple beauty, innocence, and uncomplicated human relations in contrast to the pomp and flourish of the high life around him.

"He passed away leaving behind a highly creative output spanning many genres of writing," said poet Nimah Nawwab. "His poetry, ground-breaking novels, outspokenness and sharp wit marked him in numerous ways. He was unafraid of backlashes and lived a life full of remarkable events."

at August 15, 2010
Email ThisBlogThis!Share to TwitterShare to FacebookShare to Pinterest

I’m truly sorry to read of the passing of Ghazi Al-Gosaibi. Not only did I know and like him, but he represented the sort of government official who is in far too short a supply in Saudi Arabia. His love for his country and for his fellow Saudis was amply demonstrated by the regulations he sought to create to bring more Saudi women into the workplace, to control the explosive growth of expatriate labor, to reduce the unemployment problem that desperately needs a solution.

As this piece notes, beyond being a bureaucrat and diplomat, Al-Gosaibi was also a noted poet and novelist. His poetry sometimes got him in trouble—at home and abroad—due to its pointed nature. For a while, he was in semi-exile in Bahrain (as Ambassador) because he’d offended the government. His writings, in fact, were largely banned in the Kingdom until last month.