All About Shahryar, the Jnanpith Award Winner 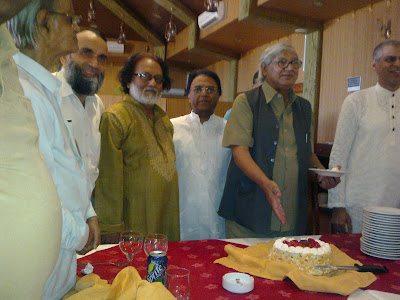 This photo, provided by Mohammad Moin Khan, shows Shahryar, second from right, being honored in Jeddah immediately after the Jnanpith Award announcement.
By Siraj Wahab
Q: Who is Shahryar?
A: Shahryar is the famous Urdu poet from India who is known in the Urdu and Hindi world for his beautiful songs in the classic Urdu film "Umrao Jaan". Critics rave about his poetry, but unlike his songs, his couplets have not been able to attain mass popularity. Perhaps, they are too refined for popular taste!

Q: What does that last bit mean?
A: Almost all of his songs in "Umrao Jaan" and "Gaman" are on the lips of film and literature lovers. People croon them all the time without realizing that they were written by Shahryar. Each song of his is a literary masterpiece -- Dil Cheez Kya Hai Aap Meri Jaan Lijiye; In Ankhon Ki Masti Me; Juztaju Jiski Thi; Ye Kya Jagah Hai Doston, etc. Look at the beauty of his words in this song from "Gaman". This is my ultimate favorite:

Or this song from "Umrao Jaan" (also a favorite):

Q: Why is he in the news these days?
A: Because he has been conferred with the Jnanpith, India's topmost award in the field of literature.

Q: Is Shahryar his real name?
A: No. His real name is Kunwar Akhlaq Mohammed Khan.

Q: His birthplace?
A: Anwala village in Bareilly, Uttar Pradesh.

Q: Aligarh Muslim University alumni are ecstatic at the honor given to him. Was he associated with the university? In what way?
A: Shahryar is a quintessential AMU alumnus. He was associated with the university's Urdu department for several years and served as lecturer, reader, professor and department chairman. He retired from active service in 1996. It is also worth noting that he spent his formative years at AMU City High School and also completed his graduate studies at AMU. Perhaps his greatest assignment has been editorship of "Fikr-o-Nazar", the university's prestigious research publication. He was also member-in-charge of the university's Public Relations Office for some time.

Q: Is Jnanpith his first award?
A: No. He got the Sahitya Akademy Award in 1987 for his anthology of Urdu poetry titled, "Khwab Ka Dar Band Hai".

Q: Is he the first Urdu litterateur to get the Jnanpith?
A: No. He is the fourth. Firaq Gorakhpuri (1969), Qurratulain Haider (1989) and Ali Sardar Jafri (1997) were the previous recipients of the award.

Q: After attaining stupendous success with "Umrao Jaan," he had a bright career ahead of him as a lyricist in Bollywood. Why did he stop writing lyrics for films?
A: Let me quote from one of his previous interviews for the answer. This is what Shahryar says: "The songs that are being made nowadays — I can't write such songs. It is not that I am against those songs but I know I can't write like that. That is why I am not writing for films anymore ... After 'Umrao Jaan', I did write lyrics for some films. One of them was 'Anjuman' made by Muzaffar Ali and many more that unfortunately could not release due to certain circumstances. Then there was one called 'Habba Khatun Zuni'. All the songs got recorded; in fact the film also was almost complete, but because of the Kashmir issue it got shelved. Another reason for my absence from the Bollywood scene was that I did not consider myself a professional lyricist, plus I don't live in Mumbai."

Q: How is Shahryar related to Moghi Tabassum of Hyderabad, Deccan?
A: The two of them edit the Indian Subcontinent's most prestigious literary journal, "Sher-o-Hikmat". When last heard, the publication was facing a financial crunch. Shahryar was also very close to the late Awaz Sayeed. In fact, there is an interesting essay on Shahryar in Awaz Sayeed's book of sketches called "Khaake".

Q: Your favorite couplets from Shahryar?
A: These two from his ghazal "Zindagi Jaisi Tamanna Thi Nahin Kuch Kam Hai" are my favorite. He read this ghazal at the mushaira in Jeddah on Thursday, Sept. 23, 2010, a day before the Jnanpith award was announced. This ghazal is perhaps closest to Shahryar's heart as well because he recites this one at all poetry gatherings. He did recite this in the 2005 Jeddah mushaira as well.

Q: What is so great about Shahryar's poetry?
A: I put that question to Hifzur Rahman, the Riyadh-based Indian diplomat, who is himself a connoisseur of Urdu poetry and literature. This is what he has to say: "Shahryar's greatest contribution is that he refused to break the mold of ghazal. What he did was to add a dash of modernity to this popular genre without tampering with its traditional structure. This is a particularly tough task, but not for Shahryar. He came out with some of the best lines in Urdu poetry."
at September 26, 2010 No comments:
Email ThisBlogThis!Share to TwitterShare to FacebookShare to Pinterest
Newer Posts Older Posts Home
Subscribe to: Posts (Atom)