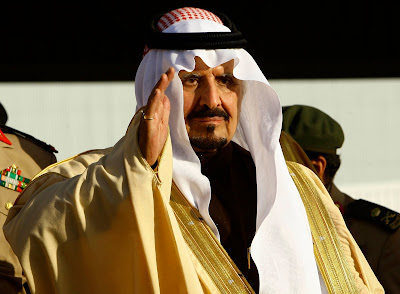 “May Allah bless the soul of Crown Prince Sultan and grant him the best reward for his services for his religion and homeland.” He died on Saturday, Oct. 22, 2011.

RIYADH: Saudi Crown Prince Sultan bin Abdul Aziz Al-Saud died in the United States on Saturday, the Saudi Press Agency announced. He was 83. His debilitating health problems had kept him out of the public eye for quite some time.

“May Allah bless his soul and grant him the best reward for his services for his religion and homeland,” said a statement from the Royal Court. As crown prince, h

He will be buried in Riyadh on Tuesday, Saudi TV’s Channel 2 announced in its 10:00 a.m. bulletin. The funeral prayers will be held at Imam Turki bin Abdullah Mosque after Asr prayers.

Born in Riyadh in 1928, Crown Prince Sultan was the half-brother of Custodian of the Two Holy Mosques King Abdullah bin Abdul Aziz. He was Saudi Arabia’s deputy prime minister and the minister of defense and aviation, and was a central figure in Saudi decision-making.

He is survived by a number of children; they include Prince Bandar bin Sultan, the former ambassador to the United States who now heads the National Security Council, and Prince Khaled bin Sultan, the deputy defense minister.

King Abdul Aziz Al-Saud founded the Kingdom more than 70 years ago. Since his death in 1953, Saudi Arabia has been unified, stabilized and modernized by his illustrious sons. The founder had over 40 sons. So far five brothers have become kings and around 20 are serving the land of the Two Holy Mosques in various key capacities.

Like the late King Fahd, Crown Prince Sultan was born to King Abdul Aziz by his favorite wife Hessa bint Ahmad Al-Sudairy. Among her other famous children are Interior Minister Prince Naif, who will now become the new crown prince, and Prince Salman, the far-sighted governor of Riyadh.

Crown Prince Sultan was the defense minister in 1990 when the First Gulf War took place to check the onward march of Saddam Hussein’s rampaging men. His son, Prince Khaled bin Sultan, served as the top commander in Operation Desert Storm, in which Saudi and international forces drove Saddam's forces out of Kuwait.

He was appointed governor of Riyadh in 1947. He was simultaneously assisting his father in the setting up of a national administrative system based on the implementation of Shariah (the Islamic law). In 1953, he became Saudi Arabia’s first minister of agriculture.

Two years later, Sultan became minister of transportation, supervising the development of Saudi Arabia’s massive roads and telecommunications network, and the construction of the railway system connecting the eastern city of Dammam with the central city Riyadh, the capital.

Unlike in other parts of the world, the line of succession in Saudi Arabia does not move directly from father to eldest son, but passes down a line of brothers born to the founder.

at October 22, 2011 No comments:
Email ThisBlogThis!Share to TwitterShare to FacebookShare to Pinterest 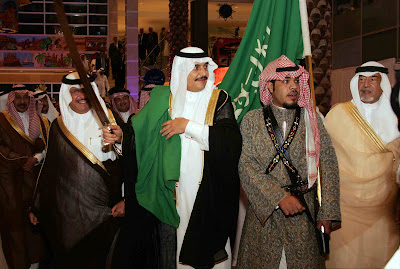 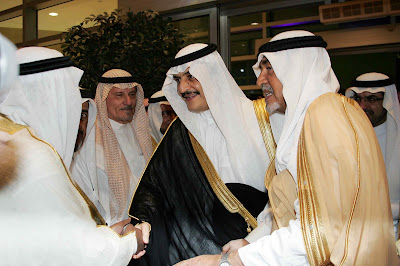 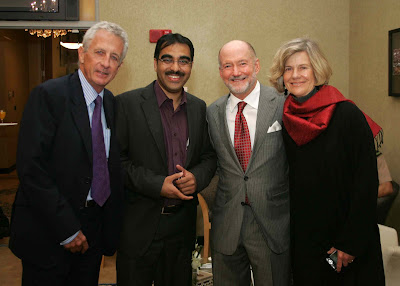 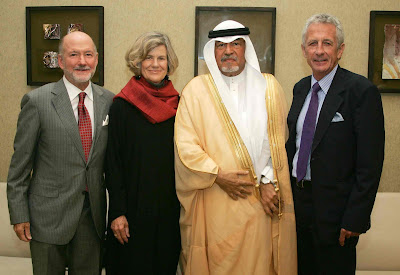 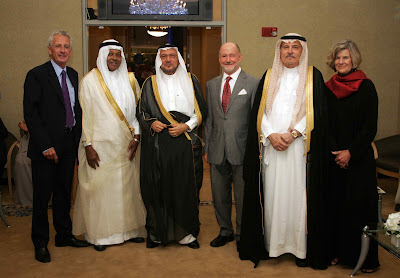 The 45-minute feature is the first to be entirely shot in Saudi Arabia, and it spans 2,000 years of history in the Arabian Peninsula. Presented in the impressive IMAX surround film format, viewers enjoyed a mix of stunning photography, interesting history and contemporary commentary. It is produced and distributed by MacGillivray Freeman Films and presented in association with the Royal Geographical Society, the Oxford Center for Islamic Studies, and the King Faisal Center for Research and Islamic Studies.

"It is a fantastic movie," said Prince Muhammad after the premiere. "The film highlights the true spirit of Saudi Arabia."

"Arabia" is the realization of MacGillivray's vision as told through the eyes of 26-year-old Saudi film student Hamzah Jamjoom, who sets out across the country to explore its history and cultural and geographic diversity. Jamjoom is working on a master's degree in cinematography at DePaul University in Chicago, and his role in this film certainly will bolster the student's career.

The film spans 2,000 years of history and the three "golden ages" of Arabia -- the Nabatean Empire, the Islamic Age, and the current era of oil wealth and technological development.

Jamjoom travels to Riyadh, to the ancient tombs of Madain Saleh, and to the holy city of Makkah. There are some spectacular scenes, especially the aerial views of the Grand Mosque during the Haj, where the sight and sound of thousands of worshippers praying together is akin to a gentle ocean tide.

Although the film is intended for a global audience, Saudis were amazed by their nation's incredible geographic and cultural diversity when seen through the giant-screen views of the exotic peninsula's wilderness and vast cities. The IMAX camera in a helicopter drifts over these landscapes, and then maneuvers through traffic and crowds of people.

"It is dramatic," said Almaeena. "It is to be seen to be believed; there is no doubt that this producer (Greg MacGillivray) is a genius. Saudi Arabia needs a couple of such films to dispel all the wrong notions that people in the outside world have about us."

The film's magic carpet touches down in Riyadh, Jeddah and Dammam. Along the way viewers experience giant dunes larger than the Eiffel Tower, pyramidal skyscrapers, Bedouin tribesmen, and other details of the fastest modernizing nation on earth. Well-staged scenes and even brief animation ably filled viewers in on the region's 2,000-year history.

From the earliest days of the Nabatean frankincense traders to the rise of Islam and the region's intellectual flowering, Arabia has twice risen to global prominence in what scholars say are two distinct Golden Eras: the Nabatean Era (100BCE to 400CE) and the Islamic Golden Era (700CE to 1400CE). During this period of "lost history," Arabian scholarship led to unprecedented advances in science, medicine, mathematics and the arts.

The film takes viewers to the ancient tombs of the lost city of Madain Saleh, where early Nabatean nomads established the region's first camel way station along the frankincense trade route more than 2,000 years ago. They visit the refreshing oasis village of Al-Ula where camel caravans sold their wares in the historic Bedouin markets and souks. They share the legendary hospitality of a Bedouin family and the warmth and glow of their lamp-lit tent. And they explore ancient shipwrecks beneath the Red Sea where today's archaeologists are searching through this sunken museum for clues to the secrets of the ancient past.

"Arabia" offers its audience an opportunity to travel to a distant land, see a country largely hidden from view, and experience a culture people know little about. The aim of the film is to educate, entertain and encourage understanding at a time when it is urgently needed. On a spectacular visual journey across this desert nation, the film portrays the people, religion, and geography of the Kingdom of Saudi Arabia.

"Arabia" includes amazing aerials, historical imagery and reenactments, as well as heartfelt scenes of ordinary life among people living in exotic, sometimes surprising, locations. The climax of the film takes place at Makkah's Grand Mosque, where 3 million pilgrims gather each year for the Haj. As pilgrims from all over the globe go around the Holy Kaaba in peace and goodwill, viewers have an opportunity to glimpse the spirit of Islam during the largest international gathering in the world. A spirit without which Saudi Arabia would not exist as it does today.