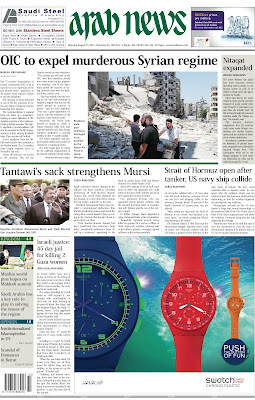 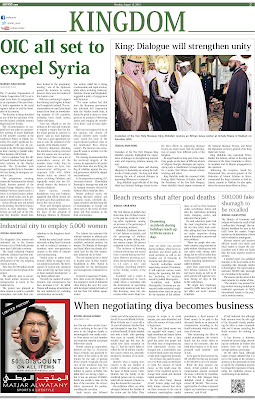 The 57-member Organization of Islamic Cooperation (OIC) is all set to expel Syria. This is to express the pan-Islamic body’s displeasure at President Bashar Assad regime’s failure to end the bloodshed in his country.

The decision is being described as one of the key outcomes of the two-day Islamic solidarity summit beginning in Makkah on Aug. 14.

The recommendation to suspend Syria was taken at a preparatory meeting of senior diplomats of OIC member countries at the Conference Palace in Jeddah yesterday. The highly significant recommendation will now be presented to the OIC foreign ministers at their meeting in Jeddah today (Monday). Their decision will be final.

Syria’s expulsion from the OIC will complete Assad’s total isolation in the Muslim world. The 22-member Arab League expelled Syria in November last year during its emergency session in Cairo.

Syrian officials were not invited to the meeting. This led the Iranian envoys to raise objections. “The Syrians are still part of the OIC, and, therefore, they should have been invited to the preparatory meeting,” one of the diplomats quoted the Iranians as saying. However, there were few takers for the Iranian view.

With Iran continuing to support the tottering Assad regime, it found itself totally isolated. The recommendation to expel Syria found instant favor from an overwhelming majority of OIC countries, including hosts Saudi Arabia, Turkey and Qatar.

“Iran has refused to see the writing on the wall and continues to support a regime that has lost the moral ground to continue in power,” said an Arab diplomat. “This was a good opportunity for Iran to go along with the sentiments of the majority of the Muslim world.”

However, the diplomats attending the marathon meeting, reiterated that the session was not acrimonious. On the contrary, there was a lot of camaraderie among all the member states. Other than its expected stand on Syria, Iran demonstrated willingness to cooperate fully with fellow Muslim states on almost all issues, including Palestine, and repeatedly stated that the OIC should remain the bedrock of Muslim solidarity.

Some nations, notably Kazakhstan, Iraq and Pakistan, suggested that efforts should not be given up to find a political solution to the crisis in Syria.

There were divergent opinions among the member countries on the issue of the genocide of Rohingya Muslims in Myanmar. One section called for a strong condemnation and rapid reaction, while the other, that included Indonesia, Malaysia, Brunei and Bangladesh, suggested a policy of engagement with Myanmar.

“The Asian nations felt that since the Myanmar government had indicated full cooperation with the Muslim world body, it should be given a chance to come good on its promise of delivering justice and bringing the murderers to book,” said an Asian diplomat.

Mali was not supposed to be on the agenda, but almost all African member states vociferously raised the issue of the unprecedented political crisis in the landlocked west African country. And so finally it was decided to include it in the deliberations.

The meeting recommended that the territorial integrity of the country be respected by all parties and that those who are flying the flag of rebellion against the central government should be stopped and condemned.

Besides political issues, the meeting discussed cultural and economic issues, interfaith dialogue initiatives and the rising tide of Islamophobia in Europe and other parts of the world. All these issues will find mention in the final communique.

-- sirajwahab@arabnews.com
at August 12, 2012
Email ThisBlogThis!Share to TwitterShare to FacebookShare to Pinterest

Very much interesting knowledge about the activities going around the world.
LED Lights Jubail

Hello Everybody,
My name is Mrs Sharon Sim. I live in Singapore and i am a happy woman today? and i told my self that any lender that rescue my family from our poor situation, i will refer any person that is looking for loan to him, he gave me happiness to me and my family, i was in need of a loan of $250,000.00 to start my life all over as i am a single mother with 3 kids I met this honest and GOD fearing man loan lender that help me with a loan of $250,000.00 SG. Dollar, he is a GOD fearing man, if you are in need of loan and you will pay back the loan please contact him tell him that is Mrs Sharon, that refer you to him. contact Dr Purva Pius,via email:(urgentloan22@gmail.com) Thank you.

We are Offering best Global Financial Service rendered to the general public with maximum satisfaction,maximum risk free. Do not miss this opportunity. Join the most trusted financial institution and secure a legitimate financial empowerment to add meaning to your life/business.